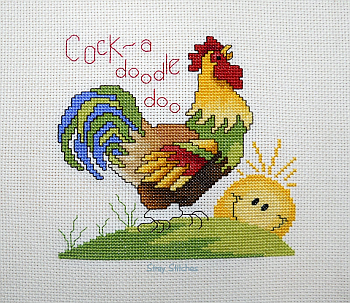 A common staple in fiction, roosters are often shown to crow at daybreak. In fact, almost all works set on a farm have this happening. In many depictions, a rooster's crowing itself is what brings the sun up.

In certain works, the rooster is replaced with a creature more suited to the setting.

Related to Howling to the Night and Wolves Always Howl at the Moon, which is when wolves howl at dusk.

Truth in Television. While roosters will crow at any time of day or night, the likelihood they will crow is determined by their circadian rhythm, which means their "crowing potential" peaks around dawn.

See also Cocky Rooster, another stereotype associated with roosters. If an artificial bird is used to indicate the time of day, it's usually a Cuckoo Clock Gag.

Only in Toobalooba will you find roosters who sing everybory awake.

Only in Toobalooba will you find roosters who sing everybory awake.