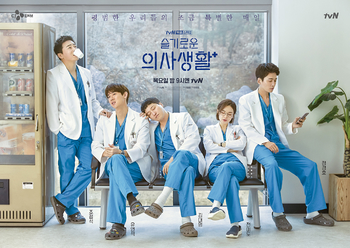 Hospital Playlist is a Korean Drama.

It is a medical drama centered around five doctors, who have been friends since they were in college together. They are:

The five doctors also have a side hobby: they unwind from the pressures of work by playing together in a rock band (thus the title, Hospital Playlist).

The first season premiered in March of 2020 and ran for 12 episodes. In the first episode Jung-won's father, Chairman Ahn, dies. Jung-won could have inherited the position, but he steps aside in favor of Director Joo Jong-soo. His condition is that he be given control of the VIP program in which the hospital charges big fees to rich people. Jung-won's idea is to steer that revenue to the "Daddy-Long-Legs" program, which he anonymously runs, and which helps less rich people with exorbitant hospital bills. He hires all four of his friends to work in the VIP program.

A second season premiered in June 2021. Song-hwa gently declines Ik-joon's romantic advances—but the plot thread continues to dangle. Seok-hyung's ex-wife, The Ghost in Season 1, shows up, complicating Chu Min-ha's hopes of a romantic relationship with her supervisor. This does not stop Min-ha from pursuing Seok-hyung with single-minded determination. Jung-won keeps up a long-distance relationship with Ik-soon, who is studying in London, but is shocked when, out of the blue, she tells him she's seeing someone else.