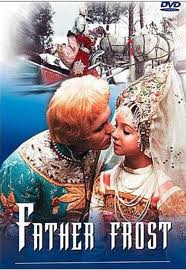 Morozko is a 1964 Soviet Christmas film directed by Aleksandr Rou. It is referred to by different English-language sources as Frosty or Jack Frost, Father Frost, and very loosely based on the eponymous fairy tale.

This comedic fairy tale fantasy tells the story of the young maiden Nastenka, and her suitor, Ivan. Nastenka is a sweet, innocent girl who's tormented by both her evil stepmother and her spoiled, ugly stepsister, Marfushka, to the point where her father's ordered to dump her out in the woods. The vain and foolhardy Ivan insults the elderly Father Mushroom and is turned into a bear because of his pride. Despite these and many other obstacles, including constant interference from the witch Baba Yaga, the two lovers finally reunite with the help of the titular character Morozko (a.k.a. Jack Frost or Father Frost), get married, and live happily ever after.

The film gained a cult following among Czechoslovak TV viewers (to the point that it's a staple of Christmas broadcasting in the Czech Republic and Slovakia to this day in no small part due to its Superlative Dubbing), as well as among fans of vintage foreign fantasy films. In 1966, it was released in the United States as Jack Frost. This version got riffed by the crew of Mystery Science Theater 3000 during the '90s. Decades later, spiritual successor RiffTrax would riff it as well.

In 2011, the film received a remake as a musical-comedy that featured such reimagining as the scene where Ivan revives Nastenka featuring a parody of "I Will Survive". It must be seen to be believed.

was released, based more on the movie than the original stories, right down to the "knitting socks before the rooster crows" scene.