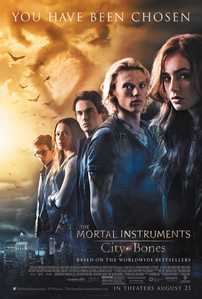 The film follows Clary Fray, who is seemingly an ordinary teenager living in New York. However when her mother gets kidnapped, she discovers that she is actually one of the Shadowhunters, a race of Nephilim who fight against demons.

The film is directed by Harald Zwart and stars Lily Collins as Clary and Jamie Campbell Bower as Jace.

A sequel based on the second book in the series was initially planned, but got scrapped after the first movie failed at the box office.