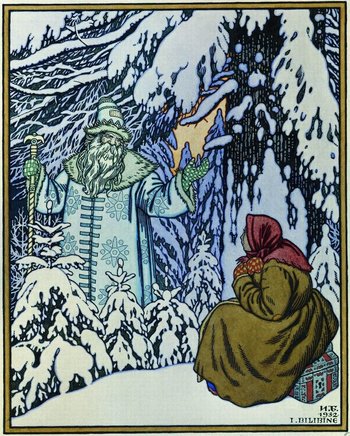 Once upon a time there was an old woman who had a daughter and a stepdaughter. And she constantly doted on her daughter, even though she was a spoiled brat, and mistreated her husband's daughter, despite being a kind, good-hearted kid.

One day, determined to get rid of her stepdaughter, the old woman orders her husband to drive the girl out into the fields and leave her to die. The old man does not dare to disobey his wife, so he abandons his daughter at the edge of the forest.

When night falls, the stepdaughter is visited by Father Frost, who asks several times if she is warm. Over and again the girl insists she is not cold at all, even though she is visibly freezing, causing Father Frost to have pity on her. Father Frost wraps her up in furs and blankets, gives her a chest full of jewels, gets her into his sledge and drives her home.

When the old woman sees her stepdaughter alive and pushing a huge treasure chest through the door, she orders the old man to take her daughter to the same spot. The old man does so and rides away. Shortly after, Father Frost arrives at the place, but the daughter gets to insult him until he gets mad and freezes her to death.

In the morning, the old woman sends her husband away to retrieve her daughter and her box of jewels. However...

At that moment the door flew open, and she rushed out to meet her daughter, and as she took her frozen body in her arms she too was chilled to death.

The version collected by Shedden-Ralston presents several significant differences: the stepdaughter is given a name (Marfa); the stepmother has two biological daughters (named Prascovia and Mashka) and she uses trickery to make her husband abandon his daughter; when his daughters get killed, she tries to put the blame on her husband, but the man finally snaps and calls her out.

The 1964 Russian film Morozko is very loosely based on the fairy tale.