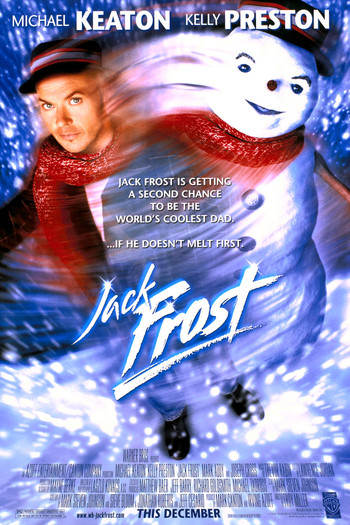 He's the world's coolest dad and he's gonna prove it!
Jack Frost is a 1998 family film directed by Troy Miller, starring Michael Keaton. Jack Frost (Keaton) is a workaholic rock singer who's on the road most of the time so he can't spend a lot of time with his wife Gabby (Kelly Preston) and son Charlie (Joseph Cross) and constantly breaks/forgets the promises he made to them. One evening, Jack decides to abandon his gig and borrows his best friend (and the band's keyboardist) Mac MacArthur (Mark Addy)'s car to go home and spend the holidays with his family. Unfortunately, a bad storm begins, and due to the faulty windshield wiper, Jack crashes his car and is killed instantly.
Advertisement:

One year later, the spirit of Jack finds himself reincarnated in a snowman's body. This is in order to allow father-son bonding that had never quite happened in Jack's human life.

Under no circumstances is it to be confused with an identically-titled Horror Comedy film that came out the preceding year.

This family film provides examples of: