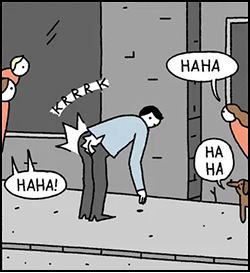 Embarrassing things happen to us all sometimes. When they happen, we trust anyone who saw said thing to afford us the dignity of not calling attention to it, and we typically do likewise when something happens to them. Besides, getting splashed by a puddle or dropping a stack of dishes isn't that funny to begin with.

When embarrassing things happen to characters in a comedy, however, every stranger within a 500-foot radius will go out of their way to stop what they were doing, point out the thing in question, laugh loudly about it, and basically humiliate the character into feeling like a quivering little pile of crap. This is known as the Freelance Shame Squad, a group of otherwise unremarkable people who abandon their better nature and laugh like a sociopathic mob upon witnessing a stranger's misfortune.

Often illustrated with a Circle of Shame shot, as the focus of the humiliation looks around them and all they can see are laughing faces.

Thankfully, this is usually not Truth in Television, as in reality most onlookers will react with either confusion, surprise, annoyance or just plain indifference when seeing someone else's faux pas. However, fear of this trope certainly exists in the minds of young people everywhere. This trope shares a bunk with No Sympathy, and like that, it's a trope that tends to really get on people's nerves. See also Embarrassed by a Child, Humiliation Conga, and Instant Humiliation: Just Add YouTube!.

Compare Open the Door and See All the People, when the character is surprised by a mob of onlookers. See also Shamed by a Mob, when the fallen character is met with the crowd's quiet look of disapproval. Compare and contrast Point-and-Laugh Show, when it's the audience who's expected to laugh at a contestant's misfortune. Related to Passing Judgment.

In Quiki Mart, a crowd of people shows up to mock Larry for his choice of "lubber."

In Quiki Mart, a crowd of people shows up to mock Larry for his choice of "lubber."