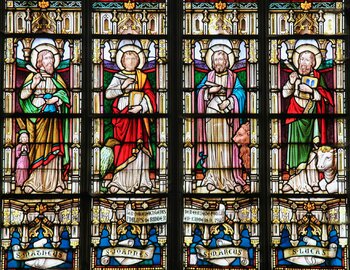 Stained glass window depicting the Four Evangelists in the Church of Stabroek, Belgium.
"'Love the Lord your God with all your heart and with all your soul and with all your mind.' This is the first and greatest commandment. And the second is like it, 'Love your neighbor as yourself.' All the Law and the Prophets hang on these two commandments."
— Jesus, Matthew 22:37-40
Advertisement:

The first four books of the New Testament, chronicling the life of one Jesus Christ the son of David, the son of Abraham. Their name means "Good News"; the idea behind the Gospels is that they exist to record the "good news" of Jesus's death and resurrection and to allow that news to be spread by Christians to the world. As a result, each of the four has a slightly different tone and target.

Matthew, Mark, and Luke are called the "Synoptic Gospels" (from Greek syn=together, opsis=seeing) because they tell largely the same story. It's generally accepted in modern Biblical scholarship that Mark was written first, and that Matthew and Lukenote Or whoever wrote those books, but let's not get into that fight copied off of Mark and got their info from other sources that no longer exist (called "Q", from German "Quelle", meaning "Source") containing Jesus' sayings and parables. They were also relying on oral traditions as well; Luke, in fact, begins his account with a claim that he has carefully investigated other accounts.

John is substantially different from the other three, and may have been included in the canon primarily because of its depth of theology despite the fact that it does not precisely align with the Synoptics on the details of Jesus' life at certain points. Again, we must emphasize: the Gospels are supposed to be "good news", not "modern historiography"; the chronological difficulties aren't meaningful in the face of the overall message.

For the many, many works based off of the Gospels and the Jesus story, see the Useful Notes page for Jesus, the trope Passion Play, and the Art Subjects index. And for the religion that's been fond of the Gospels, see Christianity.

Structure of the books:

Tropes found in the Gospels: