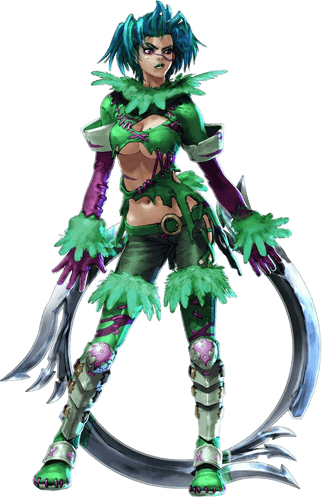 She will spin it around her body and dance the Danse Macabre over your grave.
Advertisement:

A particular class of improbable weapon. Typically consists of a pair of razor-sharp rings which are used to acrobatically slice up enemies. A bit of Fridge Logic sometimes ensues with really sharp rings: namely, where do you hold it? This is often Hand Waved away by the Rule of Cool, though. If not, it's usually explained by detailed artwork or details about said weapon in writing, by having a handle made by strips of leather wrapped around it, having the fighter wear protective gloves, or keeping them constantly spinning like hula hoops. Not perfect solutions, but better than nothing.

This may be inspired by a couple of real life weapons. The Chinese feng huo lun

("wind and fire wheels") are ring-shaped, but one section of the circle is padded to serve as a grip. The Indian chakram ("wheel") is more of a throwing weapon (thrown like a quoit), though sometimes the Rings Of Death can be thrown as well (often serving as impromptu boomerangs).