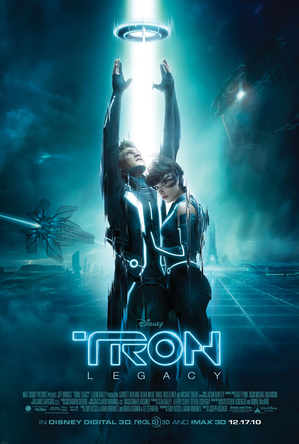 Hey, it worked in 1982.
Kevin Flynn: The Grid. A digital frontier. I tried to picture clusters of information as they moved through the computer. What did they look like? Ships? Motorcycles? Were the circuits like freeways? I kept dreaming of a world I thought I'd never see. And then, one day...
Sam Flynn: You got in?
Kevin Flynn: That's right, man. I got in.
— Opening Monologue
Advertisement:

TRON: Legacy is the 2010 sequel to Disney's 1982 Cult Classic film TRON. It was directed by Joseph Kosinski with the screenplay by Edward Kitsis and Adam Horowitz and the story by Horowitz, Kitsis, Brian Klugman and Lee Sternthal. It was released on December 17, 2010.

The film picks up where the original film's story left off: seven years after defeating the Master Control Program and exposing Ed Dillinger's corruption, Encom CEO Kevin Flynn (Jeff Bridges) begins work on a new project, one far more ambitious in scope than any of his video games. Flynn claims his new project will change the very nature of human existence, but before he can reveal the nature of this project, he disappears, jeopardizing the Encom software empire — and orphaning his young son, Sam.

20 years later, Encom has recovered from his disappearance, but Sam (Garrett Hedlund) has not. Channeling his frustration into a life of extreme activity (motorcycle riding, base jumping, etc.), Sam holds on to the hope of seeing his father alive again some day — and, eventually, his hope pays off. Alan Bradley (Bruce Boxleitner), Kevin's friend/co-worker (who also keeps tabs on Sam in case he decides to take his father's role at Encom), receives a mysterious pager message from the long-abandoned Flynn's Arcade. While investigating the message's origins, Sam discovers a secret lab in the arcade basement, where he unwittingly triggers a digitizing laser that beams him into The Grid.

With the help of the warrior program Quorra (Olivia Wilde), Sam explores the digital world, reunites with his long-lost father, and hatches a plan to escape back to reality, all while being pursued by Clu, the new ruler of The Grid — who plans on stopping the trio and taking the knowledge from Kevin Flynn for his own nefarious purposes.

A sequel has been in on/off development since before Legacy's release. The script was worked on for several years, and filming was slated to start in late 2015, with Hedlund returning as Sam Flynn, Wilde returning as Quorra, and Joseph Kosinski back in the director's chair. However, it was back-burnered the week after fellow Disney sci-fi film Tomorrowland opened with a lukewarm response. Prospective murmurs of reviving the sequel bubbled up sporadically over the next few years, but solid plans wouldn't resurface until summer 2020, when it was confirmed that the sequel was still an active project. As of now, the only names officially attached are Garth Davis as director and Jared Leto as lead actor. The return of the Legacy cast is anticipated but not confirmed, as was the return of Daft Punk's scoring (with a Disney exec even calling it an utmost priority at one point) prior to the announcement of their breakup.

open/close all folders
Tropes A to B
Tropes C to D
Tropes E to F
Tropes G to H
Tropes I to J
Tropes K to M
Tropes N to O
Tropes P to S
Tropes T to V
Tropes W to Z
"End of Line, man."
Feedback