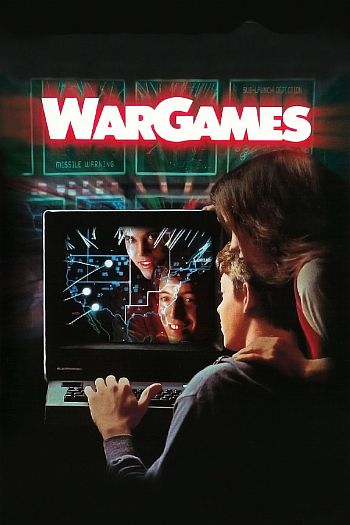 WOPR's graphics in the film aren't quite that good...
"Greetings, Professor Falken. Shall we play a game?"
— JOSHUA
Advertisement:

David Lightman (Broderick) is a teenaged Playful Hacker from Seattle who nearly sets World War III into motion by playing a game with a computer that doesn't know the difference between games and reality. Believing he has hacked into a video game software company, he challenges the computer to a game of "Global Thermonuclear War." This launches no real missiles on the Russian side, but it plays hell with said computer opponent, WOPR, the US military's computerized missile-detection and launch system.

The Government does figure out that someone has hacked into their supercomputer before they release any missiles. They have no problem figuring out who the hacker in question is, and forcibly capture him for questioning. It takes a while for David to explain that he didn't want to cause a real thermonuclear war — he was just trying to play some video games, and impress his classmate Jennifer (Sheedy) along the way. It didn't help that David booked himself and Jennifer on a flight to Paris before he started this game (he was showing off that he could do it; booking tickets online was novel back in the '80s). So not only does David have to convince everyone of the imminent danger, he has to do so while the US government believes him to be a Russian spy.

But meanwhile, WOPR wants to keep playing — and figures out how to break out the real missiles. David and the government now have to find a way to stop a nuclear war that no one really wants.

This film was released in the early 1980s, when personal computers were still new, and networking them was something few had ever seen — networks at that time only existed in the academic realm of universities and research facilities, while a few home computer hobbyists were lucky enough to dial into local BBSes or CompuServe. The general public didn't think much about hackers before this film. It also popularized the use of the term "hacker" as someone who breaks into computers, and gave an early taste of what online services could provide.

There's a novelization by David Bischoff. Also, a direct-to-DVD 2008 sequel was made, called WarGames: The Dead Code, where the US government develops another AI supercomputer called RIPLEY, this time to combat terrorism. Apparently, they didn't learn their lesson the first time.

Not to be confused with games about war: if you're looking for that, then you were probably looking for Real-Time Strategy or First-Person Shooter (most likely the former.) The ColecoVision had an adaptation

a year after the film's release, while in the nineties, there were additional videogame adaptations of the movie; the PC saw a real-time strategy game, while the PlayStation had more action-oriented, third-person vehicular combat. Both versions served as a sequel, with the again-rogue WOPR becoming something akin to Skynet and massing a full-blown military force against humanity, and the player was allowed to fight for either side. The games were generally well-received when they were released, but have since faded into obscurity. In 2006, British software developer Introversion released DEFCON, a strategy game where "Nobody wins, but maybe you lose the least." with a visual style clearly (and acknowledged to be) inspired by WOPR's graphics. DEFCON became enormously popular in several gaming circles.

It also has an official mobile game, in which you play through a storybook version of the original film's storyline by playing a quirky chain-matching Puzzle Quest variant with nukes, money, radar, and health tiles, and "tactics" and "mods", as well as an action-packed vehicle-shooting game for the Playstation, WarGames Defcon 1. Notable in that you can actually play as WOPR trying to beat each of the major characters.

How about a nice game of chess?