We Will Not Have Pockets in the Future 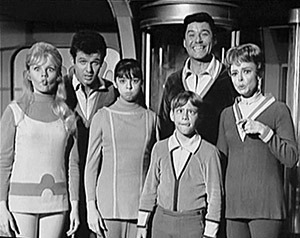 Future space explorers from the far off 1997 mock our outdated concept of "pockets" and "purses".
"The only problem I have with the costumes is that they have no pockets. Where do they keep all their stuff?"
— Jonathan Frakes, on Star Trek: The Next Generation
Advertisement:

20 Minutes into the Future, we've gone Crystal Spires and Togas, everything is decked out in this nice futuristic Zeerust, and everybody wears spandex that has no pockets.

Why? Surely fashion hasn't changed so much that we've outmoded all methods of carrying things aside from our hands (or Victoria's Secret Compartment/Trouser Space/Hammerspace), right? Wouldn't the engineers at least want a nice, functional Utility Belt? Why not a European carry-all, especially in parody settings?

In reality, pockets are a relatively recent invention, and if Speculative Fiction is any indication, they'll only be a fad.

For the opposite trope, see Zipperiffic.