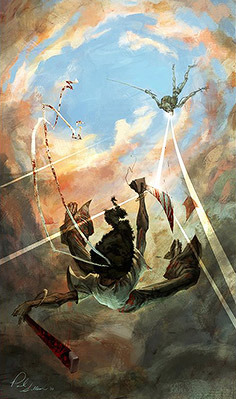 "I didn't really think this through, but it looked dramatic, didn't it?!"
— slowbeef as Meta Ridley, Let's Play Metroid Prime 3: Corruption
Advertisement:

Typically, the fight starts on solid ground at the top of a building or some other high point. The fight closes in on its climax and the combatants are too engaged in the fighting to really notice they're now falling toward a pavement-splattering end. On the other hand, both of them are usually too powerful to really be harmed by any impact, or they can avoid it by usage of a super power. A middle ground scenario is that the landing impact would be the climax of the battle that determines who would be left standing.

A free-falling fight illustrates a strong conflict between the protagonist and antagonist, where the death of the other is more important than the death of oneself.

If those falling are falling in love instead of being locked in combat, it's Free-Fall Romance.