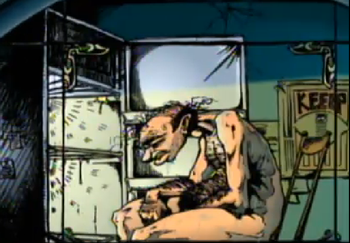 "I'm miserable, I'm depressed... and I'm hungry."
"How embarrassing. A house full of condiments and no real food."
— The Narrator, Fight Club
Advertisement:

If the characters are at all "Outsiders," be they members of a subculture (like stoners, slackers, hipsters, or rock musicians), modern artists, lonely single men (or sometimes women), or Cloudcuckoolanders, and their refrigerator is shown, it will be entirely or nearly empty, possibly save for a mysterious, unidentifiable stain, or a carton of long-expired milk. Any thing that could be, or could have been a meal would be something like an ancient, inedible sandwich, or leftover take-out ranging from the previous night to the previous year. The empty refrigerator is usually shorthand for alienation from society due either to lifestyle or poverty, and often both. Additionally, the shortage of edible food also tends to exclude such people from being viable hosts thus making the characters appear more alienated, which feeds this trope. Generally, the more socially alienated a character is, the higher the probability that their refrigerator resembles this trope. Other variants of this include a refrigerator full of alcoholic beverages and little else, or a refrigerator stocked entirely with expired food. In very, very extreme situations, the refrigerator may contain a dead (non-food) animal such as a rat or pigeon, or some other random object not usually stored in a refrigerator, like old sneakers or underwear.

Often a symptom of a Lonely Bachelor Pad; the implication being that a bachelor can't or won't shop properly or consistently. They may be in Perpetual Poverty or from the Wrong Side of the Tracks. Frequently seen in the Broke Episode. Can show up in Standardized Sitcom Housing. Usually goes hand in hand with Men Can't Keep House. Sister Trope of Bad Bedroom, Bad Life.