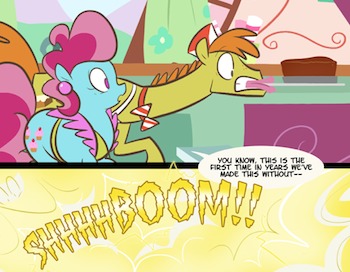 No points for guessing what happens next.
"Worry and doubt are the greatest enemies of a great chef. The soufflé will either rise or it won't; there's not a damn thing you can do about it, so you might as well just sit back and wait and see what happens."
— Captain Benjamin Sisko (quoting his father), Star Trek: Deep Space Nine
Advertisement:

A trope that is little-used these days without actually being discredited, this could be found occasionally on Dom Coms up until the early 1970s, particularly those with child characters. A cook is attempting to bake a soufflé for a fancy party or important dinner. Unfortunately, they must do so under riotous circumstances, with a consequent paranoia about the soufflé collapsing. Naturally, some event — rambunctious children or a slamming door or a car backfiring — does indeed make the soufflé fall, thus "spoiling" the event.

Two variations on this trope exist: In one, the rambunctious behavior around the soufflé is quieted down with no ill effects, only to have a relatively-distant disturbance (slamming door, car backfire) collapse the soufflé after it is "safe" (the soufflé can be replaced by say, a sleeping baby). The other works much the same, except that it is the cook him- or herself who triggers the collapse.

In reality, the only way to drop a soufflé into a puddle of goo is to: