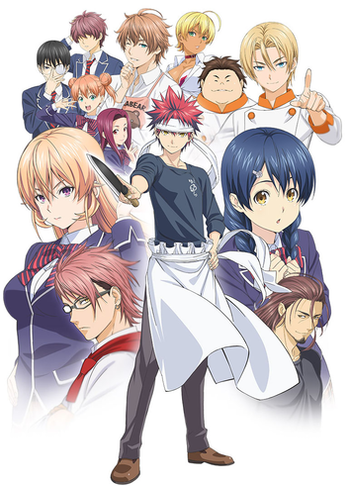 Center: Yukihira Soma. Clockwise from bottom left: Kojiro Shinomiya, Erina Nakiri, Ryoko Sakaki, Yuuki Yoshino, Zenji Marui, Shun Ibusaki, Satoshi Isshiki, Ikumi Mito, Isami Aldini, Takumi Aldini, Megumi Tadokoro, Joichiro Yukihira.
"Children, 99% of you are nothing but common rocks. You exist solely to grind to perfection the 1% of you who are diamonds!"
— Dean Senzaemon Nakiri (Chapter 4)
Soma Yukihira's dream is to surpass his father Joichiro's culinary skills and become a full-time chef at their family restaurant
Advertisement:
Yukihira. However, just as he graduates from middle school, Joichiro decides to close shop to work in New York City as a favor for a friend, sending his son to Totsuki Saryo Culinary Institute, an elite academy notorious for having a 1% graduation rate.

Upon arrival at Totsuki, he immediately runs afoul of Erina Nakiri, the proud and notoriously picky granddaughter of dean Senzaemon, who scorns his "commoner" food and brash impudence, even as his undeniable talent aggravates her to no end. And as if that wasn't enough, during his admission speech, Soma makes the seemingly foolhardy vow of using his fellow 92nd Generation freshmen as stepping stones to glory, making him a virtually marked man.

It's a long way to the top, but Soma is determined to beat his dad, elicit Erina's words of approval, and prove to his batch-mates that he really means his words.

Food Wars!, known as Shokugeki no Soma in Japan, is a 2012 cooking manga written by Yuuto Tsukuda (in collaboration with Yuki Morisaki, a chef who comes up with the series' recipes), and illustrated by Shun Saeki. The series makes liberal use of Ecchi and a variety of other visual metaphors to make preparing food, cooking food, tasting food, and merely talking about food intense enough to make you think you're reading a shonen battle manga. Not to mention that the food itself looks gorgeously mouth-watering.

The series was serialized in both the Japanese and English versions of Weekly Shonen Jump, and Viz Media released it in North America under the title Food Wars!: Shokugeki no Soma. After seven years, the series ended in June, 2019 at 315 chapters.

A TV anime adaptation by JC Staff started airing in April 2015 as part of the Spring 2015 season and ended its run in September 2015, right after the end of the Fall Classic preliminaries. The second season, Ni no Sara ("The Second Dish"), began airing in July 2016. The third season, titled San no Sara ("The Third Dish"), began airing in October 2017. A fourth season, Shin no Sara ("The Fourth Dish") aired in October 2019 to December 2019. The fifth and final season, Go no Sara ("The Fifth Dish") began airing on April 2020 until September 2020 note Due to the COVID-19 pandemic, production had to be halted after the first two episodes aired, until they resumed in July 2020.

In 2017, it was revealed that Sentai Filmworks will produce the English dub. The entire first season was released in August. As of July 2019, the dub has joined the Toonami block.

There's a lot of characters to keep track of in this anime so the openings typically names them.

There's a lot of characters to keep track of in this anime so the openings typically names them.