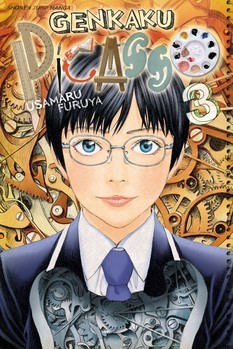 17-year-old Hikari Hamura (a boy) is an aspiring artist who, after accidentally writing "Hikaso" on his shoes, has been saddled with the nickname "Picasso". Personally, he prefers Leonardo Da Vinci. Anti-social, he is one of the only two members of the "Riverside Club", where he goes and draws by the river after school. The only other member, Chiaki Yamamoto, is the one responsible for his nickname.

One afternoon, an out-of-control helicopter crashes into them and they die. The end!

Actually, Chiaki dies, but Picasso survives with only a few scratches. A few days later, Picasso reaches into his pocket and pulls out a miniature version of Chiaki! It turns out that when she died, she prayed to the gods to spare Picasso and his talent, a wish that was granted. In exchange, though, Picasso must use his abilities to help others. When he sees someone's darkness, he draws what's present in their heart, then enters the drawing (leaving an unconscious body behind) and tries to fix the problem.

Genkaku Picasso ("Hallucination Picasso") is a manga by Usamaru Furuya, which was serialized in Jump Square from 2008 to 2010 and collected into three volumes.