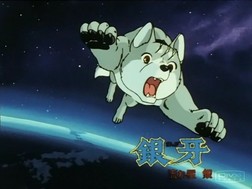 "Dog, how do you get in space?"
Advertisement:

Yes, this story is about talking dogs.

Let's be more specific: it stars Gin, an Akita pup and the son of the bear-hunting dog Riki. Riki and his owner, Gohei Takeda, had been hunting a deranged bear known as Akakabuto (based on a famous historical rogue bear who terrorized a town) after the bear killed Riki's father. Circumstances led to Gohei losing his leg, and Riki seemingly falling to his death. Thus, Gohei needed a new hunting dog. He picked Gin.

Months later, Gin, after having been trained by Gohei and returned to his original owner, Daisuke, leaves his friend to join a pack of wild dogs. It turns out that Riki survived, but with amnesia, and had formed a pack to fight and finish off Akakabuto and his fellow bears. So begins an adventure involving many battles, traveling across Japan to find allies, and learning battle techniques.

Eventually, the manga was adapted into an anime by Toei Animation in 1986. This was subsequently dubbed into a number of Scandinavian languages, and it became popular enough in those countries to get uncut rereleases. Why "uncut"? Well, most notably, both the manga and the anime are extremely violent and gory - enough for one site to describe it as "said to be one of the most violent anime ever". Don't count on it being dubbed into English anytime soon, though a decent fan-made sub was put out a few years ago.

The manga itself is another matter, as it remained strictly a case of No Export for You for years and overseas fans could only read it via scanlations. However, eventually Finnish publishers began translating it and the rest of the series due to the franchise's popularity there. Official English translations for the longest time were limited to the first three volumes of Weed being in published in North America, before the publisher went out of business. However, in 2020 the online manga distribution website Manga Planet obtained the license for translating the series, finally providing a legal way for English-speaking readers to access the original manga.

The series has since spawned an entire media franchise with sequels, spinoffs, plenty of supplimentary material, tons of merchandise, and even a musical. While not anywhere near as popular as the reigning titans of the anime/manga industry, over the years it has developed a dedicated following both inside Japan and out, and both the the series & celebrations of it continue to this day.

Assorted works in the franchise include:

Examples in the Akakabuto arc

Tropes used in the Riki prequel