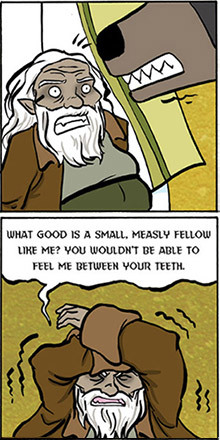 "Please don't eat me! I'm nothing but skin and bones;
I won't make a good meal, and you won't like the way I taste!"
Advertisement:

Sometimes food just doesn't agree with you. This phrase, or a variation thereof, is spoken throughout fiction by characters caught between a rock and a slobbering monstrosity trying to eat them. For obvious reasons, it's quite common in animated comedies featuring animal characters, too. The phrase is not usually expected to actually dissuade the predator from attacking—often, not even by the character in question, who'll likely consider it quite radical and far-fetched—but it can be good for stalling, giving our heroes more time to think of an effective means of escape before they're eaten by the enemy.

In some rare cases, it's related to Too Spicy for Yog-Sothoth and Regret Eating Me. Often crops up with Black Comedy Cannibalism. Not the opposite of I Taste Delicious.