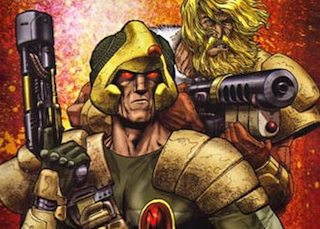 It is the late 22nd century. After a nuclear war, many of the survivors were contaminated by Strontium-90 fallout, leading to widespread mutations. Mutants face intense social discrimination, are forced into their own ghettos, and the only occupation available to them is bounty hunting on behalf of the government. Officially these hunters are known as Search/Destroy (or SD) Agents, but they are commonly referred to as Strontium Dogs from the source of their mutations.

Strontium Dog follows the career of the most famous and successful of these bounty hunters, Johnny Alpha, so called because he can emit "alpha waves" from his eyes. Johnny travels the world with his "norm" sidekick Wulf, a Norse viking, bringing in criminals in exchange for money and having varied and often surreal adventures across space and time.

Strontium Dog was created by John Wagner and Carlos Ezquerra, the creative team responsible for Judge Dredd, and initially published in the short-lived sci-fi Anthology Comic Starlord in 1978. When that mag folded, Strontium Dog moved to 2000 AD, where it has been ever since. Shortly after the move, Wagner brought on Alan Grant as a co-writer; Grant would quickly become the writer most associated with the comic.

In 1990, Johnny was killed off in a Heroic Sacrifice to save mutants, over Ezquerra's objections. The series was then spun off into Strontium Dogs which followed a group of supporting characters led by Johnny's friend, Feral, which was cancelled in 1996. Johnny himself would make a few more appearances in both Strontium Dogs and Judge Dredd due to Time Travel. In the a later arc, Johnny is resurrected by a group of necromancers, and Feral and Gronk must journey to their planet to rescue him. Unfortunately, he ends up dying again.

In 1999, a TV series based on Strontium Dog and Outlaw was proposed. This ultimately never materialised, but Wagner took the pilot's plot and started writing a new series of Strontium Dog stories. This revived series took the view that the classic stories were legends told about Johnny's life, with the new series presented as what 'really happened'. As such, the stories were considerably more down-to-Earth, and a number of old plot points were taken in significantly different routes.

However, after the initial reboot, the series returned to the original canon, this time telling stories that occurred before Johnny's death. Then, in 2010, a story entitled "The Life and Death of Johnny Alpha" appeared, set after Johnny's death and revealing what really happened to Johnny's body. It culminated in Johnny coming back to life, and the series continued intermittently until the death of Carlos Ezquerra in 2018. Since then, it remains on indefinite hiatus.