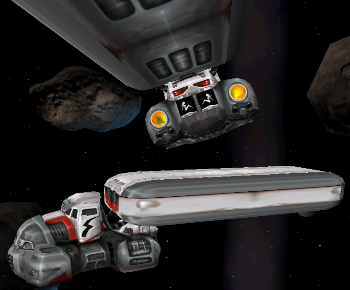 Complete with space mudflaps.
"We got music in our solar system!
We're space truckin' through the stars!"
— Deep Purple, "Space Truckin'"
Advertisement:

When space westerns decide to get literal with the genre name, these guys tend to show up.

They are usually depicted as, well, southern-fried, blue collar truckers that happen to fly cargo spaceships instead. Usually easygoing, unflappable, and have a backwoods wisdom developed from their experience during the long hauls between solar systems. Occasionally they're smugglers with contraband Black Market goods, but usually aren't drug mules. If they have cargo that Fell Off the Back of a Truck, they may have to elude military vessel inspections and spaceport City Guards.

From time to time, between hauls they'll stop at a local tavern and challenge various folks to a little arm-wrestling, drinking contests and then drunken brawls in Wretched Hive spaceports. Tend to talk in a Southern or slight Texan drawl.

Their ships are most likely Used Future pieces of rusted, salvaged junk, just barely held together, with a focus on function, not aesthetics. Bonus points if they're blocky, and bear a surprising resemblance to modern Mack trucks or other 18-wheelers.

In movie and TV show history, the introduction of blue collar workers to mainstream science fiction in the 1970s with Dark Star and Alien was a big change, as up until then characters on spaceships tended to be highly educated astronauts, engineers, and physicists. Finally, audience members who work with their hands could see themselves reflected in sci fi.

Often a Sub-Trope of Intrepid Merchant and Hard Truckin'.