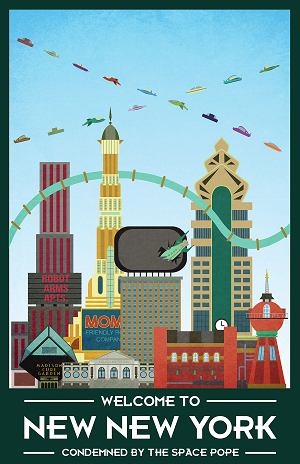 When a major city or province is destroyed during The End of the World as We Know It, and it gets rebuilt After the End, instead of going back to the original name for it (or naming it something else), it's common practice for the builders to tack on "New" or "Neo" to the original name, probably to show how this incarnation is nothing like the old, destroyed one. If there's still ruins of the old city left, you can bet that the remaining townsfolk will refer to it as "Old"-whatever, as a show of how much they want to forget what happened and move on.

Settlers and colonists also frequently use this in order to name new cities, countries, and planets after their homeland, whether the original still exists or not — in this case, it's to show that their new home will be a new, better version of the old. Because of Planetville tendencies, it's not uncommon to see entire planets named things like "New London".

This trope is a time-honored hallmark of the Cyberpunk genre. There are a variety of reasons for this. Perhaps Old Tokyo was destroyed in the Great Offscreen War; perhaps nebulously-defined environmental collapse or nuclear fallout rendered it uninhabitable; maybe the occupants were forced to flee when the usual suspects took over the world, and rebuilt it somewhere else.

Because of the phenomenon of Creator Provincialism, the city in question will nearly always be New York or Tokyo, although in the first case it's generally Played for Laughs, for obvious reasons.