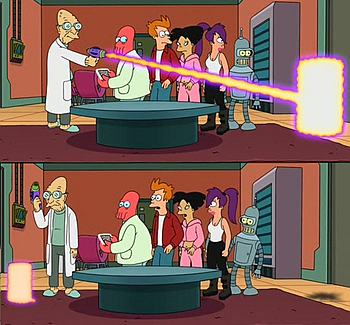 "Good news, everyone! I've invented the most Awesome, but Impractical way to take out the trash!"
Advertisement:

This is basically the Impossibly Cool Weapon crossed with Teleportation.

It's a Ray Gun or Energy Weapon-like device that usually resembles a gun or rifle, with a trigger, barrel, grip, etc., whose purpose is (usually) the teleportation of its target (or sometimes, the teleportation of its user), often but not always instantaneously. There are variants, such as weapons that teleport their ammunition rather than their target, or which deploy a portable teleportation system (such as portals) for the user; there are also examples of Teleport Guns disguised as ordinary objects.

Another significant variant is when the use of regular old Energy Weapon and a teleportation device are combined to fake a person's death by teleporting the target an instant before they would be hit by the weapon discharge, as the teleportation effect is similar to the in-universe appearance of molecular disintegration from an Energy Weapon. To observers, the subject will appear to have been vaporized.

If the target is not teleported, but rather the user, than it is usually for escape or a tactical advantage.

The Teleport Gun is frequently an invention of the Mad Scientist.

Inversions and other Subversions, like guns that teleport bullets through walls to reach a target, or guns that teleport virtually endless ammunition from another location into their magazines, are worthy of mention. Subtrope of Weaponized Teleportation. Sometimes used as a way of averting the terms "kill" and "die", especially in more kid-friendly works. Compare with Dimensional Cutter.