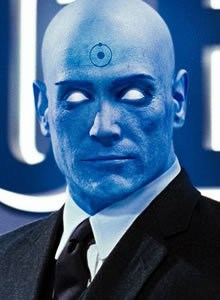 Victim: Uh... about your eyes, sir, did you injure them?
Jei: They merely reflect one whose soul has been touched by the Gods.
— Usagi Yojimbo, "The Nature of the Viper"
Advertisement:

In Real Life, some people have different colored irises, but what they can't have is a pupil, iris and sclera be the same color. In fiction, however, this isn't an issue, and you can get characters with eyes that have only one color.

Many modern comic books have superheroes' eyes turn pure white while wearing masks. Apparently, this is to make them look more "disguised" than they would with just their (normally pretty flimsy) half-masks. This does, however, have the drawback of dehumanizing them in the eyes of some fans. Blank eyes coupled with Glowing Eyes of Doom usually indicate that someone is using his/her power (e.g. spellcasting) or about to.