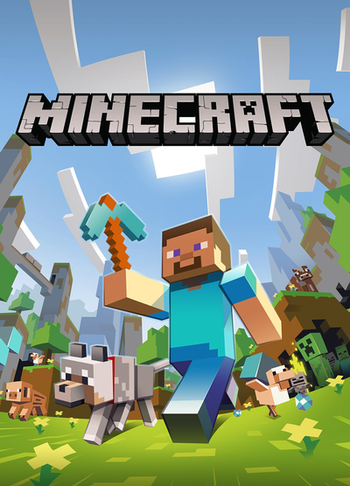 Less addictive than TV Tropes!
"Let's go to a place where everything is made of blocks, and the only limit is your imagination. Let's go wherever you want to go. Climb the tallest mountains, venture down to the darkest caves. Build whatever you want; day or night, rain or shine, because this is the most significant sandbox you'll ever set foot in. Build a majestic castle, invent a new machine, or take a ride on a roller coaster. Play with friends, build your little community. Protect yourself with the strongest armor that you can craft, and fight off the danger of the night. No one can tell you what you can or can not do. With no rules to follow, this adventure is up to you."
— Official Minecraft Trailer

Massively popular, the game was originally released on PC by developer Mojang, but has since moved to every major video game console and mobile platform.

The game's popularity cannot be overstated. With over 238 million copies sold, it is the number one best-selling game of all time, surpassing the previous record-holder Tetris. The game's popularity is so high and its fanbase so large that Microsoft bought Minecraft for over two billion dollars in 2014. Part of the game's success can be credited to its deep and open-ended gameplay that encourages creativity and exploration: there is no fixed or structured storyline or narrative, and players are given utter freedom to decide how they want to interact with the world, as well as make their adventures within the game.

In Minecraft, nearly everything in the game is made up of similarly-sized cubes. From dirt to rock, to tree trunks. The "world" of Minecraft is nigh-infinite and constantly generates new and unique landscapes as the player explores. Players can scale blocky mountains, swim across bodies of water, or explore any one of the many caves winding through the ground underneath them. The world is bound by unbreakable "bedrock" at the bottom and a height limit at the top where players can no longer place blocks. There are also two alternate realms players can travel to: the "Nether", a hell-like dimension, and "The End", a barren land where a terrible dragon awaits.

The three main modes in Minecraft are Creative, Survival, and Hardcore. In Creative, the players can destroy and place blocks with a single click. They can use any block in the game, cannot dienote Barring using the "/kill" command or falling below Y=-64 in the void, and can fly. For the most part, it's focused solely on building, and can be used to easily make very large structures or pixel art. Monsters and animals still spawn in the game world, but are passive and will not attack the player. On the other hand, survival forces the players to manually collect the blocks they want to use and give them a health bar and the possibility of death. It also introduces crafting and hunger systems, and monsters will be aggressive and attempt to kill players. The players are forced to scrounge for supplies, building up a base to protect themselves from monsters while also mining deep underground for valuable materials. Players must craft various equipment to help them survive, such as pickaxes to make mining blocks quicker, or swords and armor to help fend off the monsters that come each night. Hardcore mode is almost identical to Survival except for the fact that the difficulty is locked on hard, and if you die, you'll respawn in Spectator Mode, which cannot interact with the world.

The game can be played in single-player or multiplayer. Multiplayer servers feature shared persistent worlds, allowing multiple players to either collaborate on grand projects or compete against each other. The game also features a very active mod community and has launched many popular YouTube Let's Play channels, shows and personalities, such as the Yogscast, Achievement Hunter's Let's Play Minecraft, Stampylonghead, Minecraft channels from Little Kelly (and her sister, Little Carly), an upcoming Minecraft channel from Oceane Marie and Sky Does Minecraft.

Minecraft is notable in that it follows an MMO-style support model despite being largely single-player and receives updates from time to time. The game also began as an indie game and was created by Swedish programmer Markus "Notch" Persson as a Spiritual Adaptation of a freeware game from Zachtronics Industries called Infiniminer. First released in 2009, Minecraft started very basic and only had the equivalent of Creative mode. Various other modes, such as Survival Test, Indev, and Infdev were slowly added in and refined/renamed, as well as many of the now-standard features (like the day/night cycle). In the summer of 2010, it was updated to Alpha status and moved to Beta status later that year. Despite the game being "officially" released in 2011, many new features have continued to be added. As previously mentioned, in 2014, Microsoft bought Mojang (and thus Minecraft) but assured fans they planned to continue the game's ongoing development, which they have by releasing one to two updates per year, save for 2015 where it was not updated. As of 2022, the game is on version 1.19. Mojang has confirmed at least one more major update and likely has many more in development.