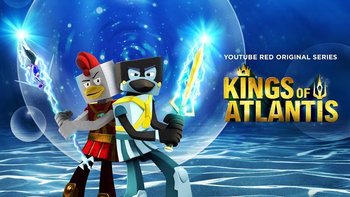 In the underwater kingdom of Atlantis, two brothers, Cody the penguin and Joe the chicken, are to ascend to their father Atlas' throne and become the new kings of Atlantis, when suddenly on their coronation day, their Evil Uncle Phaeton attacks and seizes the throne and takes over Atlantis, banishing the two princes away. Cody and Joe must embark on an adventure to defeat Phaeton and take back Atlantis for once and for all.

The series was short-lived and only ran for one season of 13 episodes in 2017. The first episode can be watched here

for free without subscription.