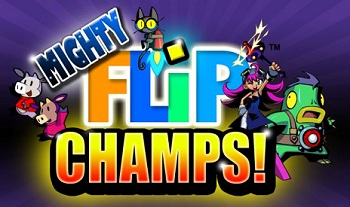 A DSiWare game by WayForward, later released as a Playstation Mini title. Could be a described as a platformer/puzzler hybrid as your goal is to reach the level's exit (a froggish Fishman) in each level which you must accomplish through flipping (hence the title) from the top and bottom screens to get past various obstacles.

It was followed up by Mighty Milky Way and Mighty Switch Force!