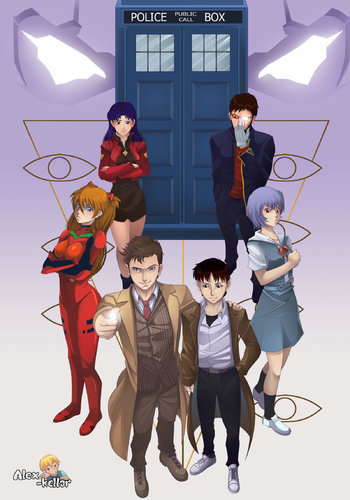 "The Doctor in his Tardis, and all in this world will soon be right." -Commission by Alex-Kellar
Isn't it obvious?... You and me, Shinji Ikari. We're going to save the world.
Advertisement:

Series Thirty and Three Quarters (also known as Shinji and the Doctor and Doctor Who: The Evangelion Error) is a Doctor Who / Neon Genesis Evangelion crossover written by a troper known variously as philopoemen and machiavelli. One miserable, rainy day, fourteen-year-old Shinji Ikari meets a very odd man who calls himself the Doctor (specifically the Tenth Doctor, during the period of time he spent traveling in between "The Waters of Mars" and "The End of Time") on a train. Unfortunately, something else has followed them on-board. That's when the screaming and the running starts... and when Shinji's life starts to change. Because the Doctor is in, and where he goes, chaos is sure to follow...

The series serves two purposes: first, it's an excuse to have the various unresolved questions and mysteries of the Evangelion universe investigated by a — let's say — uniquely qualified individual. Second, it gives Shinji a mentor figure who — while having his own issues — still brings a lot of experience to the table. The question is, will it be enough to change the destiny of humanity?

Read it now on Archive of Our Own

, on Wattpad (book one

), or on A Teaspoon and an Open Mind

In addition to the character tropes present in the original work, this story provides examples of: