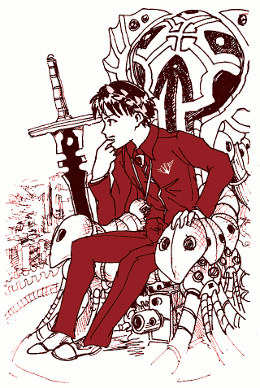 is a Neon Genesis Evangelion Fan Fiction that crosses over with Warhammer 40,000, written by Charles Bhepin.

Shinji Ikari, Evangelion's protagonist and Butt-Monkey, discovers a case full of Warhammer 40,000 miniatures and rulebooks at a very young age, and they have a profound effect on his personality and relationships. He becomes an efficiently intellectual power-player who knows no fear, charges headlong into combat without hesitation, exhibits incredible planning abilities, and gains the adoration of everyone around him.

There are numerous other influences and references at work besides Evangelion and Warhammer. The story loosely follows Evangelion's canon events, but diverging greatly around the end of chapter nineteen. Shinji himself becomes a very different character, and the rest of the cast develop differently but with some connection to their canon selves. The story oscillates between pitched battles and domestic comedy, the mood going from bleak despair to Hot-Blooded defiance.

The effects and implications of Second Impact are explored to a greater extent than in the source material. The author has also acknowledged TV Tropes as an aid to the fic. Be aware that Chekhov's Armoury is very much in effect, and continuity can be tricky to follow as a result. Started in 2007, the story was declared finished in 2019 at 791,000 words.