"One could say that this person is going to get involve in a grand expedition." 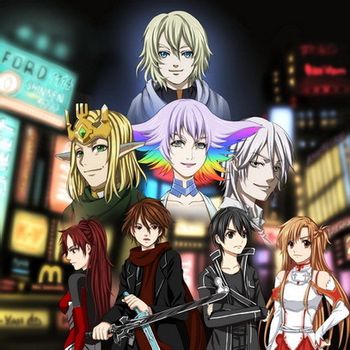 His own world, come undone. The art cover is done by Kai-Yan

is a Guilty Crown Mega Crossover co-author fanfic by Ford1114

of their personal take being set years after the anime. This special ‘23rd episode’ is about the canon versions of Shu, Ayase, and Tsugumi meeting new people such as their Guilty Crown: The Lost Kingdoms counterparts and the Magical Girls, while there are many subplots to celebrate New Years Eve in Manhattan. However, when Da’ath makes their return with their own Legion of Doom, it’s up to the heroes and villains teaming up to stop then, while the canon!Shu confronts his past for his salvation.

This is also taking place in Kanius Production Abridged as the fourth story, where these corners have parodied what its like for the crossover characters to have parties. The main fanfics that are use in this shared universe are YuYuGiDigiMoon, Digimon Fusion Kai, and Digimon Accel Stream. However, Shinnen:New Year stands out as a sophisticated special with grimmer situations, despite retaining the same tropes. It is also served as the series finale to that fanfic franchise.