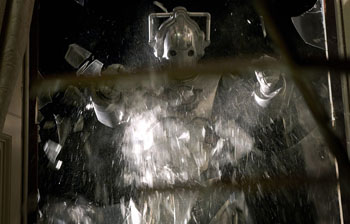 ...I suppose a remark about "crashing the party" would be appropriate at this point, sir!...
Mrs. Moore: Bad news is, they've arrested Thin Jimmy, so that just leaves you.
Mickey: Leaves me what?
Jake: The number one. Top of the list! London's most wanted!
Mickey: Hah hah, OK, cool. [beat] Say that again?

The one where Barty Crouch Jr. learns his dad is actually the evil one.

Huh? What do you mean, "wrong universe"?

Oh... oopsie! That's right... We're visiting a different parallel universe in this one. Although... the Doctor Who crew was hopeful at arranging a Harry Potter Crossover with the Tenth Doctor at one point.

Written by Tom MacRae, this episode takes some ideas from Marc Platt's Big Finish Doctor Who episode "Spare Parts", for which Platt receives acknowledgement in the end credits.

Past, future... where HAVEN'T we been yet, in the new series? How about... ANOTHER UNIVERSE!

The TARDIS falls into a parallel universe where Rose's dad isn't dead, Rose was never born* But is, for some reason, a dog., Mickey's grandmother never died, everybody wears earpods and there are, for some undetermined reason, zeppelins everywhere.

And they have a power problem. The TARDIS will only run off power from its home universe, which they are not in. So it's a good thing the Doctor finds a little power crystal that can recharge itself with the right kind of energy (don't ask); now all they have to do is relax for 24 hours while it does its thing. Surely they can stay out of trouble for one day, right?

If you thought they would for even the slightest moment, you are reading the wrong recap.

Right on cue, despite the Doctor warning about not interfering with anything, Mickey and Rose run off to find out what's different about where they are, besides the earpods and the zeppelins and the President of Britain and everything.

Rose and the Doctor crash Rose's mum's birthday party. Mickey runs into Ricky, his parallel self, and Ricky is not very happy about it. And just to drive it home, if the title hadn't tipped you off, we get the first new series appearance of everyone's favourite army of steel soldiers, as newly-created Cybermen show up at the party and kill several people before surrounding the Doctor and Rose. The Doctor tries to surrender, but the Cybermen will not back down. Cliffhanger ending.

Alternative Title(s): Doctor Who NSS 2 E 5 Rise Of The Cybermen