Recap / Doctor Who S22 E6 "Revelation of the Daleks" 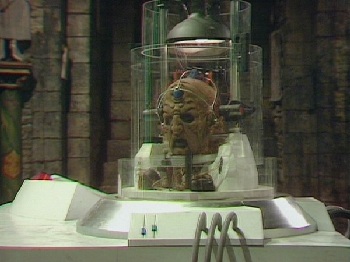 "Once I have destroyed the Doctor, and his preposterous coat, I will be unstoppable! The universe will fall to the supreme might of the Daleks!"
The Doctor: But did you bother to tell anyone that they might be eating their own relatives?
Davros: Certainly not! That would have created what I believe is termed... "consumer resistance".
Advertisement:

The one where Davros starts taking notes from Emperor Palpatine, and the Doctor gets cut off mid-sentence by the end credits. Followed by a hiatus thanks to also being the one where a certain sod drew the line.

The TARDIS lands this week on the rather snow-covered planet of Necros, literally a graveyard planet for the universe, to pay respect to the late agronomist Arthur Stengos. The Doctor is wearing a blue overcoat, which looks quite neat and not eye-killing bad. It's also apparently the local colour of mourning, if only because nobody anywhere in the universe would think his usual technicolour nightmare suitable for that purpose. He makes Peri wear a blue overcoat as well. While the Doctor and Peri bumble around outside for the vast majority of the first episode, we are introduced to a plethora of characters running the main offices of Necros — a place called Tranquil Repose. Here, the dead are buried and the near-dead are placed into suspended animation. They're entertained by a radio DJ with a fake American accent who randomly dresses up as musicians in the eras between the 1950s and 1980s.

The Doctor and Peri continue to meander through the snow, and Peri finds some neat-looking flowers that the Doctor compares to a soybean... and then the Doctor is savagely attacked by a completely random mutant, who he defeats in seconds. As it turns out, the radio DJ is watching them in a life-and-death struggle and broadcasts to the citizens of Tranquil Repose. In fact, for some reason, white Daleks are trundling around the resort for the dead, serving the severed head of Davros! So, of course, Davros takes this pretty well and demands that... people deal with the intruders who just invaded the lower catacombs of the building.

And then those intruders, Natasha and Grigory, come across the remains of the Natasha's father, Arthur Stengos, who is being rebuilt into a Dalek, with a clear casing for once. This explains where those white Daleks who are apparently loyal to Davros come from. Natasha had suspected something strange when Arthur, uncharacteristically, requested to have himself placed in suspended animation. The intruders then blow him up to put him out of his misery.

In any case, the mutant tells the Doctor and Peri about this guy known as "the Great Healer", who apparently made him this way. Then he dies. So now the Doctor and Peri are going to go see this Great Healer and talk to him... if they can actually find the place. They do find a lovely statuary, filled with memorial statues for every person who's been laid to rest there... including the Doctor? As the Doctor nears the statue, it topples over, falling onto him.

As it turns out, the Doctor was not crushed by the falling stack of polystyrene. Finally breaking into the building known as Tranquil Repose, Peri and the Doctor quickly find themselves stuck in the middle of about 5 running plot threads — involving not just Davros, but also the mercenary Orcini note Think Don Quixote, a group of grey Daleks, the fact that Davros is making Soylent Green, and a romantic subplot that ends with an asshole being killed by the woman who pined for him. Needless to say, the Doctor and poor Peri are quickly captured and are still royally confused while Davros exposits about how awesome he is. Luckily, Peri escapes and stumbles across the DJ, who is currently fighting off Daleks with a gun that fires compressed rock and roll. And then the DJ dies.

So, the Doctor and Orcini escape from Davros — blowing off Davros' hand in the process. Peri meets up with the pair, but not before Orcini decides to stay behind and blow up the entire Soylent Green factory and Dalek-making facilities instead. The remaining surviving orderlies of Tranquil Repose wind up escaping the resulting explosion, Davros is captured by the traditional gray Daleks who then take him off to a trial where he will most certainly be exterminated, and the Doctor suggests that the people make Soylent Green out of those flowers that Peri found earlier rather than people.

Peri whines that this wasn't exactly a restful location to be, and objects to a few ideas from the Doctor. So, the Doctor smiles at Peri and offers to take her to—

We never really got to find out where the Doctor was going to take Peri onscreen, actually. It was supposed to be Blackpool, and the Doctor finishing his sentence would've opened up the next serial, but instead their very next adventure was into an 18-month long break that nearly cancelled the series. The fans, and the production team, had a royal fuss over the whole ordeal, to the point where record producer Ian Levine (who previously contributed to the recovery of a great number of missing episodes) gathered together members of the show's cast to record the charity single "Doctor in Distress

The originally planned story, "The Nightmare Fair", would have seen the return of the Celestial Toymaker, who this time would've developed a fondness for video games. Some of the lost stories were put into storage by their writers, while others, not more than sketches or ideas, were completely lost. However, three of the lost stories were turned into novelisations courtesy of Target Books (The Nightmare Fair, Mission to Magnus and The Ultimate Evil). Big Finish have also adapted these, along with a number of proposals that were considered for the lost 1986 season (and some for the 1985 season), as full-cast audio adventures (they also delight in making snarky references to Blackpool at every opportunity).

This story marked the final appearance of Peter Howell's arrangement of the Doctor Who theme which had been in use for the past five seasons since "The Leisure Hive". When the show returned from its hiatus, it would be with a new arrangement of the theme by Dominic Glynn.

This was also the final serial in the 45-minute episode format of the classic Doctor Who series. This format wouldn't return to the series until the revival in 2005, with the first episode. The show came back in its original 25-minute format, treading lightly in the wake of a controller who thought the show wasn't up to par anymore. There would be no more no more cinematic outdoor filming, the whole series would be now fully videotaped both in-studio and on-location, and BBC reduced the episode count by season to just 14 episodes.

When Doctor Who finally returned in 1986, the show and the Doctor would be on trial... in more ways than one...