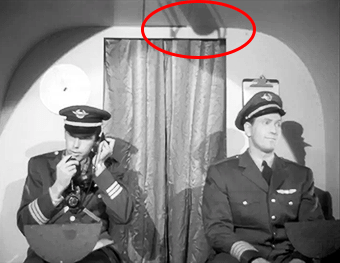 ♫
"The boom mic is so far into the shot I could describe the boom operator to a fucking sketch artist!"
— The Cinema Snob on Dolemite
Advertisement:

When a boom microphone or its shadow makes it into the final production by accident. This may be done on purpose for parody (particularly in the case of Show Within a Show) or to break the fourth wall (assuming there was one to begin with).

This is a common Blooper in old Soap Operas, sitcoms and dramas videotaped (sometimes filmed) with Three Cameras, where all of the dialogue has to be recorded using overhead boom microphones. Less common on single-camera TV shows and movies, but it does happen. Much more scarce today because drama shows don't use multi-camera any more, and any stray shadows can be removed digitally.

Boom mic sightings were not uncommon in Open Matte VHS and Laserdisc transfers of films intended for projection at 1.85:1, as more of the image was being shown than originally intended. This, too, has all but disappeared with the advent of widescreen HDTV.

When Ken jogs in a street, a visible boom mic is seen as the camera shakes.

When Ken jogs in a street, a visible boom mic is seen as the camera shakes.