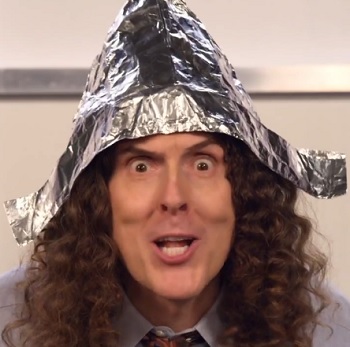 Thought control rays, psychotronic scanning
Don't mind that, I'm protected cause I made this hat.
D'Ork of the Thorkoth: I seem to recall it was your bright idea to spend billions of credits on those orbiting mind-control lasers!
Dr. Zarkendorf: How was I to know that tinfoil hats would become the latest fashion?
— Plan 7 of 9 from Outer Space
Advertisement:

When a writer wants to establish a character as a Conspiracy Theorist, a Crazy Survivalist, or another kind of paranoid Cloudcuckoolander, they usually give them hats made out of tinfoil to wear, ostensibly to protect themselves from The Government's Mind Control rays.

As The Other Wiki can tell you, however, aluminium actually has very little shielding effect and covering just the top of the head with it leaves the rest of the body (including the bottom of the head) "unprotected", anyway. (In fact, if improperly made, the tinfoil could amplify any radiation reaching the head.) So whoever is wearing it must be... funny in the head to begin with. Or the more sinister interpretation: the whole idea that tinfoil will protect you is Just What They Want You To Think.

To elaborate: To shield off radiation, you need steel. Electromagnetic waves consist of alternating areas of electric fields and magnetic fields. To reflect them, you need a material that shorts both electric fields and magnetic fields. In terms of shorting electric fields, any metal (being conductors) does an adequate job — aluminium (which so called tinfoil is usually made of, despite its name) is even a very good conductor — but to short magnetic field you need a ferromagnetic metal, like iron, nickel or cobalt. As iron is seldom used nowadays, the best choice is steel (an alloy of iron, carbon and tiny amounts of other components). Just take a look at a video-recorder: Videorecorders may have fancy chassis made of aluminium, but if you look inside, you will see a small box behind the coaxial connectors, where the aerial is connected, containing the high frequency circuitry. This box is made of steel in order to shield the radiation.

Of course, this assumes the threat is actually radiative in nature.

It isn't really clear where this stereotype originated, though. After all, how many actual conspiracy theorists do you know of who wear these?

Dylan's Our Only Hope

As part of their plan to trick Dylan, Dolly and the pups don tinfoil hats to protect themselves from alien mind control.

Dylan's Our Only Hope

As part of their plan to trick Dylan, Dolly and the pups don tinfoil hats to protect themselves from alien mind control.