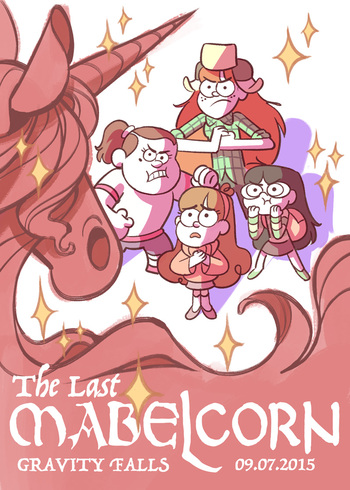 "YOU HAVE NO DOMINION IN OUR WORLD!"
—Ford Pines to Bill Cipher

One night, Ford is visited in his dreams by none other than Bill Cipher. Bill welcomes his "Old buddy" back to Earth, explaining that he's been preparing for 'The Big Day'. According to him, Ford won't be able to protect the Rift forever. Upon waking up, Ford realizes, "He's coming. I have to warn them!"

The next day, Ford calls for a family meeting and shows the Twins a picture of Bill. To his surprise, the kids are more than familiar with the triangle demon. Ford finds Bill's increased activity very concerning, and determines that they need to prepare themselves. Dipper asks what Ford's history with Bill is, but the Author dodges the question by listing their defenses; He knows of a spell to 'Bill-Proof' the Shack, but the last component is unicorn hair, and unicorns only give their hair to the pure of heart. Mabel, self-proclaimed pureheart and lover of all things girly, eagerly leaps at the chance to go unicorn-hunting. Ford gives her Journal 1 for help, but doesn't like her chances. He's met unicorns, and knows they can be frustrating. Since Bill-proofing the Shack might be out, the next best thing is to Bill-proof their minds, and takes Dipper down to his private study, in the floor between the main Shack and Portal lab.

Meanwhile, Mabel, along with Wendy, Candy, and Grenda, find the sacred meadow where the Unicorn Celestabellebethabelle lives. Celestabellebethabelle refuses to give any hair, claiming that Mabel is impure of heart and unworthy. Recalling how she commonly makes fun of Dipper, Mabel takes this to heart, and decides that she needs to up her game in the good department.

Back at the Shack, Ford explains more about what Bill is. He comes from another dimension, and can only access Earth through the mindscape. Through that pathway, he can possess a body like he did Dipper's. There are two ways to protect their minds from Bill's control; either get a metal plate installed (Like Ford did. *Clang*) or use a machine he built, that can scan and encrypt anyone wearing the helmet. Dipper asks again about Ford's encounter with Bill, but the Author ducks the question again, and hooks Dipper up.

Mabel and friends go on a binge of do-goodering, and when they get back to Celestabellebethabelle, she tells them…that doing good deeds to make yourself look good doesn't mean anything. Mabel is crushed, whereupon Wendy decides that it's time for the 'Wendy way'; take the hair by force. After getting some pixie dust from a gnome, the other girls knock out Celestabellebethabelle, but are stopped by Mabel, who doesn't like their methods. Celestabellebethabelle wakes up, denounces the girls…and two more unicorns show up, annoyed that C-beth is pulling the 'pure of heart scam'. "Kid, unicorns can't see into your heart. All our dumb horns can do is glow, point towards the nearest rainbow, and play rave music." Outraged at being jerked around, Mabel instigates a brawl between unicorns and humans.

At the lab, Dipper decides to see into the napping Ford's mind with the mind-reader. The computer shows Ford and Bill making a deal, and upon further inspection, sees that the study is a tiny shrine to Cipher! Ford wakes up, and a terrified Dipper, thinking Ford is possessed, shoots him with the memory ray. The beam bounces off Ford's head, breaking the mind-encrypter. Ford calms Dipper down, showing his eyes are normal, thus, unpossessed. He's unhurt by the ray, his mind protected by his metal plate, and decides to come clean about Bill.

"Bill wasn't always my enemy, Dipper. In fact, I used to think he was my friend."

Ford's investigation of Gravity Falls had hit a wall. He couldn't figure out what was causing the town's weirdness. One day, he found an ancient cave painting about a being with answers. In spite of the warnings not to, the desperate Ford read the inscription aloud. Nothing happened, but when Ford slept Bill Cipher appeared in his dreams. Bill claimed to be a muse, who chose one mind once a century to guide. Won over by Bill's smooth talk, Ford gave the triangle permission to enter his mind whenever. Together, the two designed the Universe Portal. But after the incident with McGucket, Ford became suspicious. He confronted Bill over the Portal's true destination. Bill dropped his friendly facade and revealed that when the Portal opened, "The people of your world are gonna learn how to party!" Realizing he'd been tricked, Ford shut the Portal down and hid the Journals so no one could complete Bill's work…a plan that came to naught when Stan used the Portal to save Ford. All Bill needs now to finish his plan is the tiny Rift in order to merge Earth with the nightmare realm he comes from.

Up in the main Shack, Dipper and Ford ponder how to defend themselves from Bill with the mind-scanner broken. At this point the girls return triumphant, having obtained more than enough unicorn hair. Ford congratulates Mabel, and he and Dipper complete the ritual. But Bill Cipher is not stymied so easily…

Bill Cipher: I guess I can't possess anyone inside the Shack, so I'll just have to find my next pawn on the o u t s i d e.