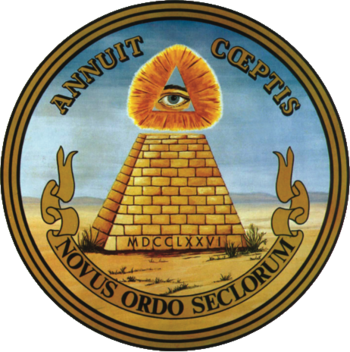 Who controls the British crown? Who keeps the metric system down? We do, we do!
Who keeps Atlantis off the maps? Who keeps the Martians under wraps? We do, we do!
"There was a magic bullet! It was forged by Illuminati mystics to prevent us from learning the truth!"
— The Question, Justice League Unlimited, "Question Authority"

The Ancient Conspiracy. The Omniscient Council of Vagueness. The One World Order. Founded at the dawn of human history, if not earlier, they gather influence and wealth, spinning their webs of lies and deceit in the shadowy heights of society. Or maybe they're just a bunch of rich old men with pretensions of grandeur. Either way, when a creator of popular culture needs a name for this group, they often turn to "The Illuminati" and their "Eye in the Pyramid" symbol; both have percolated their way into semi-general use, come across as refined and ancient, and (mostly) aren't under copyright.

"Illuminati" means "the enlightened ones" in Gratuitous Latin. There was a Masonic-like organization of intellectuals which was given this name in Real Life Bavaria in the 1770s, but it was eventually disbanded by the Bavarian government.note At least, officially. (Cue spooky music) There are people who fervently believe the Illuminati survived this purge, orchestrated The French Revolution (as part of their One World Order efforts), and still exist, very much as described above; find more details under Real Life below, or go check out Wikipedia's article.

This name is bandied about a lot over in the Wild Mass Guess department. See also The Knights Templar. If you're looking for the Marvel Comics group by this name, see here.

For best effect, listen to this song

while reading the article.

Postponed due to Illness

Postponed due to Illness