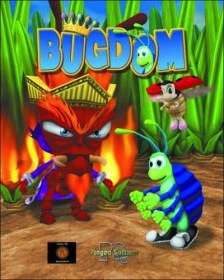 Bugdom is a third-person Platformer developed by Pangea Software and released in 1999. It came preinstalled on second generation iMacs. In it, you play a cute little pill-bug named Rollie McFly, who is on a quest to free the land of Bugdom from the grip of the tyrant King Thorax and his legions of ant soldiers. On the way, Rollie must fight a variety of different bug-themed enemies, find colored keys that open specific leaf doors, kick open walnuts to collect useful items, and free ladybugs from spider-web cages.

Levels 1 and 2 are based on a lawn, level 3 takes place in a pond, levels 4 and 5 are set in a forest resembling a bug's interpretation of a garden, levels 6 and 7 are set inside a beehive, level 8 is akin to the lawn again but at night, and levels 9 and 10 are set in the anthill.

In late 2020, a hobbyist programmer, with Pangea Software's support, released a free and open-source version of the game for modern versions of Microsoft Windows, macOS, and Linux, which you can download from GitHub