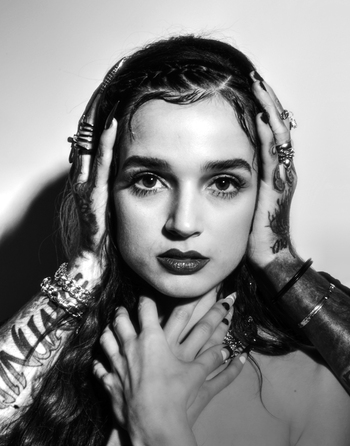 On the surface, Poppy (formerly called "That Poppy") is a teenage pop singer from Los Angeles who releases music on the Internet and also doubles as a YouTuber who frequently posts promotional vlogs. Take a quick glance at these vlogs, however, and you'll quickly notice that's she's... odd.

In reality, "Poppy" is a musical art project based on the persona of singer-songwriter Moriah Rose Pereira (born January 1, 1995). The project was initially started in 2011 under similar names (including "Moriah Poppy"), gaining a small YouTube following for Pereira covering well-known songs as well as releasing a few original songs and music videos (many of which have been removed from her channel, but can still be found on the web if you look hard enough).

In 2014, she partnered with director Titanic Sinclair (real name: Corey Mixter), which led to Poppy being revamped into the surreal performance art project synonymous with the name. In layman's terms, her new image was a bizarro take on standard teen/bubblegum pop stars with light J-pop elements, although she was anything but standard. The project ran on strange, abstract videos with subject matter such as her teaching you how to load a pistol, spinning around for three minutes, interviewing a plant, and listing the names of famous people, all presented with a pastel color palette and creepy, almost hypnotic aesthetic. Recurring themes in the videos consisted of her strange obsessions with technology, celebrity culture and the Internet, with surrounding motifs including mind manipulation, cults, and the occult. These themes were further reflected in the official music she began releasing around this time, consisting of ambient and synthpop.

Like Poppy herself, the videos were intentionally strange and difficult to understand, described by Sinclair as "a combination of Andy Warhol's pop accessibility, David Lynch's creepiness, and Tim Burton's zany comedic tone," made to be the "strangest part of your day." With the occasional overt comedy/sarcasm, uncomfortable unfamiliarity, and admittance that most of their work doesn't have an actual intentionally-placed meaning, this era of Poppy could be defined as a strange bit of "post-irony" or a running satire/commentary on Internet culture to a perpetually undefined extent. Regardless, the videos attracted a huge online community attempting to decipher their true meanings, whether they existed or not. Further blurring the line between fiction and reality was Poppy's strict maintaining of her persona on other online channels, and allegedly offline and in public, too.

However, Poppy would spend the late 2010s steadily distancing herself from this image in her content and appearance, showcasing a maturing of her character. Her bubbly pop music began to adopt experimental, PC Music-reminiscent elements before crossing over completely into heavy metal similar to Japanese alt idols. Her lyrics (all written by Pereira from the start) began sharing more defiant and rebellious attitudes with the persona's themes blending in the mix. Her videos saw an increase in production value and transitioned into mostly makeup tutorials that may be the least outwardly weird that Poppy content has ever been, while still carrying undertones of her trademark darkness and surrealism. As for her persona, Poppy ditched her blonde pastel look for dark hair and gothic fashion, and her public demeanor — while still considered a character — is now significantly toned down in terms of the robotic quality once associated with her, with more of her genuine personality allowed to shine through.

This evolution would culminate in December 2019, weeks after taking Sinclair's directing credits off of many of her videos and outright removing others from her YouTube channel, when she announced the dissolution of their partnership

. In her statement, she accused him of emotionally manipulative behavior, attempting to continue that behavior with former friends, and subtly acknowledged another person who had also accused him of such behavior: Mars Argo.note Titanic Sinclair previously collaborated with Mars Argo, some aspects of which were reused in Poppy. Argo later sued both Sinclair and Poppy for copyright infringement

in 2018, claiming they both copied Argo for the Poppy project. Argo also accused Sinclair of "severe emotional and psychological abuse and manipulation" and claimed Poppy was a knowing accomplice, which she has denied. Argo settled out of court with Sinclair and the copyright case against Poppy was dismissed.

Has nothing to do with that other Poppy or those brothers named Poppy, and none of them will put them to sleep.

On July 10th, 2019, a graphic novel was released which claims to be the definitive answer to dispel all the conspiracy theories in regards to Poppy.

Her video channel is here.

Her Vevo channel is here.