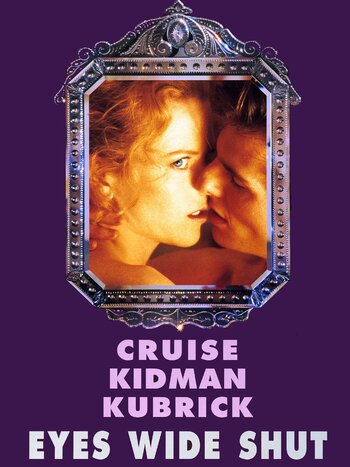 "No dream is ever just a dream."
Alice Harford: Millions of years of evolution, right? Right? Men have to stick it in every place they can, but for women... women it is just about security and commitment and whatever the fuck else!
Dr. Bill Harford: A little oversimplified, Alice, but yes, something like that.
Alice Harford: If you men only knew...
Advertisement:

Eyes Wide Shut is Stanley Kubrick's last film, completed just days before his deathnote Kubrick died of a heart attack just two days after screening his final cut of the film for Warner Brothers and released sporadically from July to September, 1999. Based on Arthur Schnitzler's 1926 novella Traumnovelle (Dream Story), the story is transferred from early 20th century Vienna to 1990s New York City.

The film follows Dr. Bill Harford (played by Tom Cruise) as he spends two noirish, surreal nights on his sexually charged adventures wandering New York City when his wife Alice (played by Cruise's then wife Nicole Kidman) reveals that she had contemplated an affair a year earlier.

No relation to Dies Wide Open.

"I do love you and you know there is something very important we need to do as soon as possible."
"What's that?"
"Fuck."
Feedback