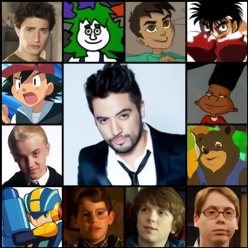 Gabriel Ramos (in the middle) and some of his roles
Advertisement:

Gabriel Ramos Villalpando (born September 18, 1986), known also by his nickname "Gabo" is a Mexican voice actor, who has also worked as a host for TV shows, and as a VJ for MTV. His Star-Making Role came when he was cast as the voice of Ash Ketchum in the Pokémon anime, which he held for almost 10 years, until he moved to Argentina, and had to be temporarily replaced. He still managed to record Ash's voice for two more seasons, until contractual obligations prevented him from voicing the character anymore.