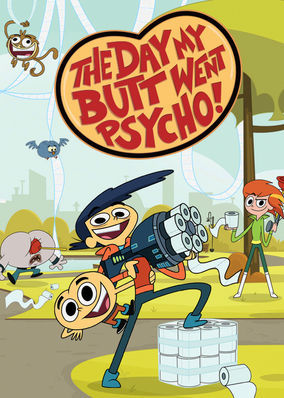 Butts: always one step behind. Years ago, butts rose up to overthrow humanity. But humans fought back, and now an uneasy peace remains as the world waits for the next great buttfighter!
—The backstory from the intro which explains all you need to know to enjoy the show.
Advertisement:

Loosely based on Andy Griffiths' series of grossout/Toilet Humor-themed books of the same name, The Day My Butt Went Psycho! is a Canadian-Australian animated series from Canada's Nelvana and Australia's Studio Moshi.

The series follows the misadventures of 12-year-old amateur buttfighter Zack Freeman, his autonomous and sapient butt Deuce, and their far more competent female friend and fellow buttfighter Eleanor Sterne, who is the daughter of the legendary buttfighter Silas Sterne. When not getting themselves into all sorts of wacky butt-related shenanigans, the trio battle the Great White Butt and his henchbutts, The Prince and Maurice to thwart his evil schemes and prove just how awesome (or lame) they are as buttfighters.

Along the way, our Comic Trio of heroes will lampshade a ton of tropes, frequently lean on the fourth wall, and settle into an interesting hybrid between Deranged Off-Model animation and the more traditional "on-model" style, while dropping all sorts of bathroom puns just because they can.

The show debuted in 2013 on Nine Network in Australia and later arrived on Teletoon in Canada in 2014. The series ran for 40 episodes over 2 seasons, with the second season being exclusive to Netflix (where it was shown in the United States and most other parts of the world).

Interestingly, the show is actually the second Canada-made Animated Adaptation of Andy Griffiths' books, the first being What's with Andy?, which was based on his Just! series and incidentally also aired on Teletoon.

Nelvana has every episode up on Youtube, courtesy of their Keep It Weird channel.

Tropes that apply to this show: