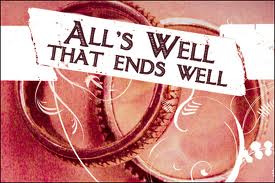 "When thou canst get the ring upon my finger, which never shall come off, and show me a child begotten of thy body that I am father to, then call me husband; but in such a 'then' I write a 'never.'"
This is a dreadful sentence.
— Helena, reading a letter from Bertram, 3.2
Advertisement:

A play by William Shakespeare. With its unusual plot and odd resolution, it straddles the line between comedy and tragedy, and is considered to be one of Shakespeare's "problem plays". It was based on a story from The Decameron.

Helena is a beautiful but lowborn woman, the orphaned daughter of a great physician. She serves as gentlewoman to a French countess and is secretly in love with Bertram, the countess' son. Bertram leaves to become the ward of the King of France, but the king suddenly falls ill. Helena promises she can save him, but asks that she be able to marry any lord she chooses; the king agrees. Using the knowledge her father imparted to her, she cures him, and he gives her leave to marry above her class.

She chooses Bertram as her husband, but adds that he doesn't have to marry her if he doesn't want. The king will have none of it, and orders that Bertram marry his rescuer. Furious about the match, Bertram escapes to Italy shortly after the wedding, along with his cowardly friend Parolles. Bertram sends a taunting letter to Helena, declaring that he will not have her as a wife unless she meets two requirements: She must get his family ring, and she must become pregnant with his child. Since he never plans on returning to France, he brags that neither will ever take place.

Helena is distraught, but sets out to retrieve her husband. She winds up in Florence, where Bertram is living, and discovers he now has his sights set on Diana, the daughter of a widow. With help from the young lady, Helena tricks Bertram: First, she has Diana convince Bertram to give up his family ring as a love token, which she then gives to Helena. Next, Diana invites Bertram into her room; Diana and Helena execute a Bed Trick, and Bertram ends up sleeping with his wife. In an unrelated subplot, Parolles is exposed as a coward and exiled from the army.

With the help of the countess, Helena spreads rumours that she has died, prompting Bertram to return to France. She follows in secret, along with Diana and the widow. Once everyone is all together, Helena reveals that she 1) is not dead, 2) has Bertram's family ring, and 3) is pregnant with his child, thanks to their one-night romp. His conditions met, Bertram promises "I'll love her dearly, ever, ever dearly."

"All is well ended, if this suit be won."