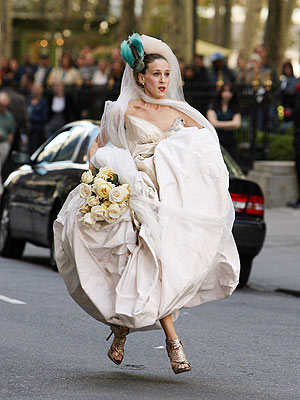 Obviously a difficult choice for the bride. Do you know how hard it is to run in Manolos?
"She walked away from a happy man
I thought I was so cool,
I just stood there whistling
'There goes the bride' as she walked out the door."
— They Might Be Giants, "Lucky Ball and Chain"
Advertisement:

A wedding trope, focusing on the bride who abandons her groom at the altar, either to be with her new flame, celebrate her independence, or she has cold feet for some story-related reason. This often occurs at the climax of the movie, and is frequently (though not always) treated as being a heartwarming and positive affirmation of the power of True Love/Independent Women for the would-be bride. The fact that it's also a humiliating, heartbreaking, psychologically-scarring betrayal for the would-be groom tends to be glossed over. Often occurs after the priest has said, "Speak Now or Forever Hold Your Peace."

Alternately, we get stories focusing on the heartbroken bride who is left at the altar, and the absolute cad who ran away and left her there.

This trope could be the result of societal expectations. Men are stereotypically expected to have a dose of dread before a wedding. It's supposed to be more shocking when it's the woman who backs out to be free and single, or run away with another man. Since this offers zero comfort to the poor schlub who just got dumped in front of his family and friends on his big day, writers are careful not to develop the would-be groom too much — or they flat-out make him the villain — to keep audiences from sympathizing with him and calling her out on her recklessness. This trope is particularly common if the character (or her social/cultural background) cares more about getting married than whether or not the relationship is marriage material in the first place. She runs away when she realizes this is absolutely not what she wants.

While it is more common in modern works for it to be the woman who is viewed sympathetically, whether she is the runaway partner or the jilted-at-the-altar partner, there are plenty of cases of it being played the other way. Generally, it depends on the gender of the protagonist.

If these characters think a bit more and made their escape before the ceremony, they become Runaway Fiancé(e)s instead. Less humiliating for the other parts implied, but not that much.

If you were looking for the Doctor Who episode, see here. The 1999 Julia Roberts and Richard Gere movie can be found here.