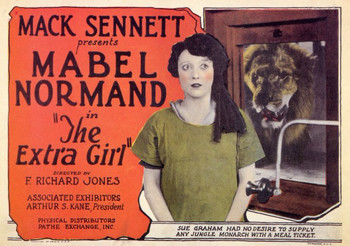 Hollywood can be very exciting
Ah, the old story of the simple Midwest girl who heads off to Hollywood in the hopes of becoming a star. No doubt it was an old story even in 1923, when it was put to film in the silent comedy The Extra Girl.
Advertisement:

This time, the girl is Sue Graham, played by Mabel Normand in her last feature film. Fleeing a loveless Arranged Marriage, she escapes to comic misadventures in Tinseltown. She is soon joined by Dave Giddings, her childhood sweetheart. Later on, her parents join her out west, and get their life savings swindled by a crook. Also, a lion gets loose in the studio at one point.