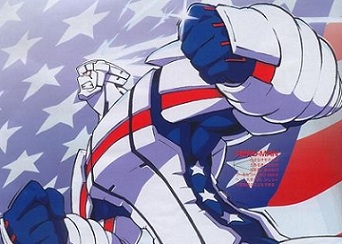 This robot was made In America!
"...Just remember that you and I are made from the same stuff: taxpayer dollars, American pride and the sweat of an honest day's work."
— Big Guy, Big Guy and Rusty the Boy Robot
Advertisement:

Welcome to Eagleland, bitches! We're rich, industrious, militarily powerful and burningly patriotic! How to show that in fiction? Why with Giant Robots of course. An American Robot, in short, is any super fighting machine that hams up the USA to the power of eleven. Expect them to be decked out in the stars and stripes, packing the heavy artillery, and burning with sheer American pride.