Film / The Extraordinary Adventures of Mr. West in the Land of the Bolsheviks 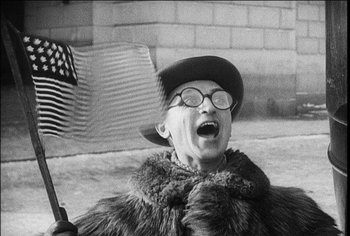 That's what a U.S. flag looks like, right?
Greetings from Soviet Russia. Burn all the New York magazines and hang a portrait of Lenin in my office. Long live the Bolsheviks!
— Mr. West's message home at the end
Advertisement:

The Extraordinary Adventures of Mr. West in the Land of the Bolsheviks (Russian: Необычайные приключения мистера Веста в стране Большевиков) is a 1924 Soviet comedy film directed by Lev Kuleshov.

The film is about Mr. John West, a naïve American man, and his visit to Soviet Russia, Ukraine, and So On. Warned of what dangerous barbarians these Bolsheviks are, he brings along Jeddy, his cowboy bodyguard, for protection. Mr. West's fears seem to be confirmed when, soon after his arrival in Moscow, his briefcase is stolen. But actually, the thief is affiliated with a cell of counter-revolutionary criminals, and they're thrilled to realize that there's a wealthy American in town. Meanwhile, Mr. West and Jeddy get separated due to a comic misunderstanding. Jeddy is rescued by Ellie, a young American woman who happens to be living in Moscow. Mr. West, however, is "rescued" by the criminals, who have concocted an elaborate con that uses his fear of the Bolsheviks against him.

This being a Soviet production, it goes without saying that Mr. West ends the film as a converted Bolshevik. However, the majority of the film is more farce than propaganda.