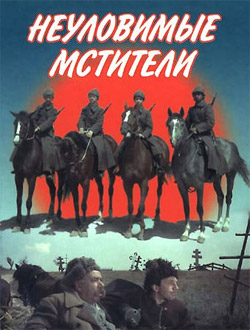 Horsemen of the Apocalypse for the Whites
The Elusive Avengers (Неуловимые мстители, Neulovimye mstiteli) is a trilogy of Soviet youth-oriented action movies. The first movie is a typical Ostern; the second, New Adventures of the Elusives, takes place in a city and is more like cinematic spy action, and the third, Crown of the Russian Empire, is similar to the second and is stylized after 1920s Soviet pulp adventures.
Advertisement:

The main heroes of the trilogy are a quartet of Russian Civil War era teenagers who become Child Soldiers and then Cheka agents: the bold straight arrow hero Danka, his sister Ksanka, their smart-aleck buddy Valerka and a roguish Roma boy named Yashka. Their adventures start when Danka has to avenge his father's death at the hands of a bandit warlord; it quickly brings them into fighting the Russian Civil War first against bandits and anarchists, then against the Whites. After the war is over, the now (barely) adult Avengers become Cheka agents.