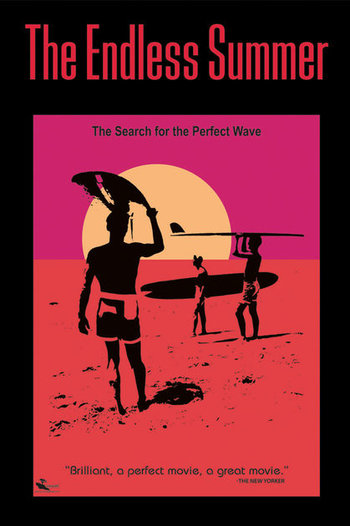 The Endless Summer is a 1964 documentary film (nationally released in 1966) about surfing produced, written, directed, and narrated by Bruce Brown.

This film is responsible for bringing the surf movie genre to the mainstream and popularizing the sport around the world. The bulk of the movie follows two California surfer dudes, Mike Hynson and Robert August. After it starts to get cold in California in the fall, Hynson and August go on a quest around the globe, traveling to the Southern Hemisphere in search of an "endless summer". The film showcases places where surfing is popular as well as cultures who have never seen a surf board. Occasionally the journey of Hynson and August is interrupted by interludes showing surfing in California or the north shore of Oahu.

Not to be confused with the 1974 Greatest Hits Album Endless Summer by The Beach Boys, or with the visual novel Endless Summer (or with Everlasting Summer, for that matter), or with tropes such as Endless Winter or It's Always Spring.