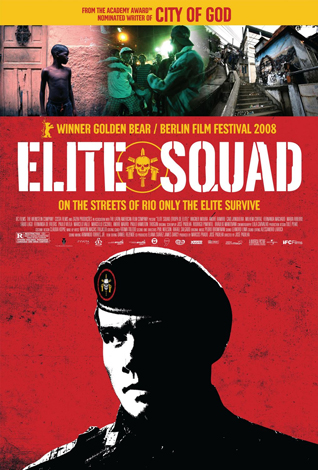 "There are three kinds of policemen in Rio. Those who are corrupt, those who look the other way, and those who go to war."
— Roberto Nascimento
Advertisement:

The Elite Squad (originally named Tropa de Elite) is a Golden Bear-winning 2007 Brazilian movie depicting the war between Rio de Janeiro drug dealers and the police - specifically, the BOPE (Batalhão de Operações Policiais Especiais: "Special Police Operations Battalion"), the most feared police force in the State. In the midst of this war, Captain Roberto Nascimento (Wagner Moura) prepares for retirement as his first child is born. To replace him, there are two regular police officers - hotheaded Neto (Caio Junqueira) and the more intellectual Matias (André Ramiro). Add to the mixture police corruption, and you've got it.

The movie was quite a success in Brazil, strangely, even before being officially released, with the amount of pirated copies of it being sold, which kinda contradicts the spirit of "don't finance crime" of the film. It has been basically the greatest meme generator in Brazil in recent history and the protagonist, Captain Nascimento, is now recognized as a true Memetic Badass.

It has also stirred some controversy regarding human rights, due to the Jack Bauer Interrogation Technique used by the BOPE crew, being the cover of some of the most important magazines in the country.

A sequel was released in 2010. In it, Nascimento (now a Lt. Colonel) is Kicked Upstairs after Matias kills an armed prisoner while controlling a prison rebellion. He uses the new job to equip BOPE and destroy most crime in Rio... which leads to the corrupt cops (referred to as "militia") deciding to take over the slums where drug dealers had control. Only gets worse from here. It became the Brazilian movie with the highest attendance ever in theaters.

José Padilha, who directed both films, went on to helm the 2014 remake of RoboCop.

Has a Character Sheet in construction.