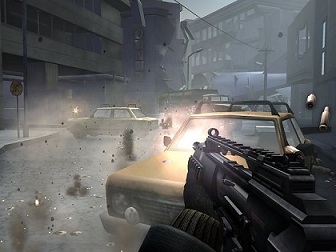 Black is a First-Person Shooter released on the PlayStation 2 and Xbox in 2006. It was made by Criterion Games, who also developed the Burnout series. Black follows the story of Sergeant First Class Jack Keller, a black ops soldier being interrogated about a terrorist organization known as 'Seventh Wave'. The in-game missions begin four days before the interrogation and soon revolve around Jack searching for William Lennox, the new leader of the Seventh Wave, across a variety of locations in Chechnya.

Black received good to lukewarm reviews criticizing its paper-thin plot, short length, and lack of multiplayer but praising it for its explosive action, detailed guns and impressive technology. It even picked up awards for its sound design.

Received a Spiritual Sequel in the form of Bodycount (2011).